Deprecation: This app has been partially made irrelevant by ScreenJunkies.com All Shows listing.
My version is still more compact and easier to browse if it still works.

Live
Check it out!
Screenshots
View

I like to watch the content the awesome ScreenJunkies Team creates, but the ScreenJunkies website has some usability and performance issues that are making me not want to use it. Let’s look at an example use case:

I already watched the latest Honest Trailer Commentaries yesterday, but prior to that I didn’t watch the show for a few weeks. I want to watch the one episode before the latest that I missed.

Let’s see what issues come up when trying to achieve that. (click the image to watch the screen recording1): 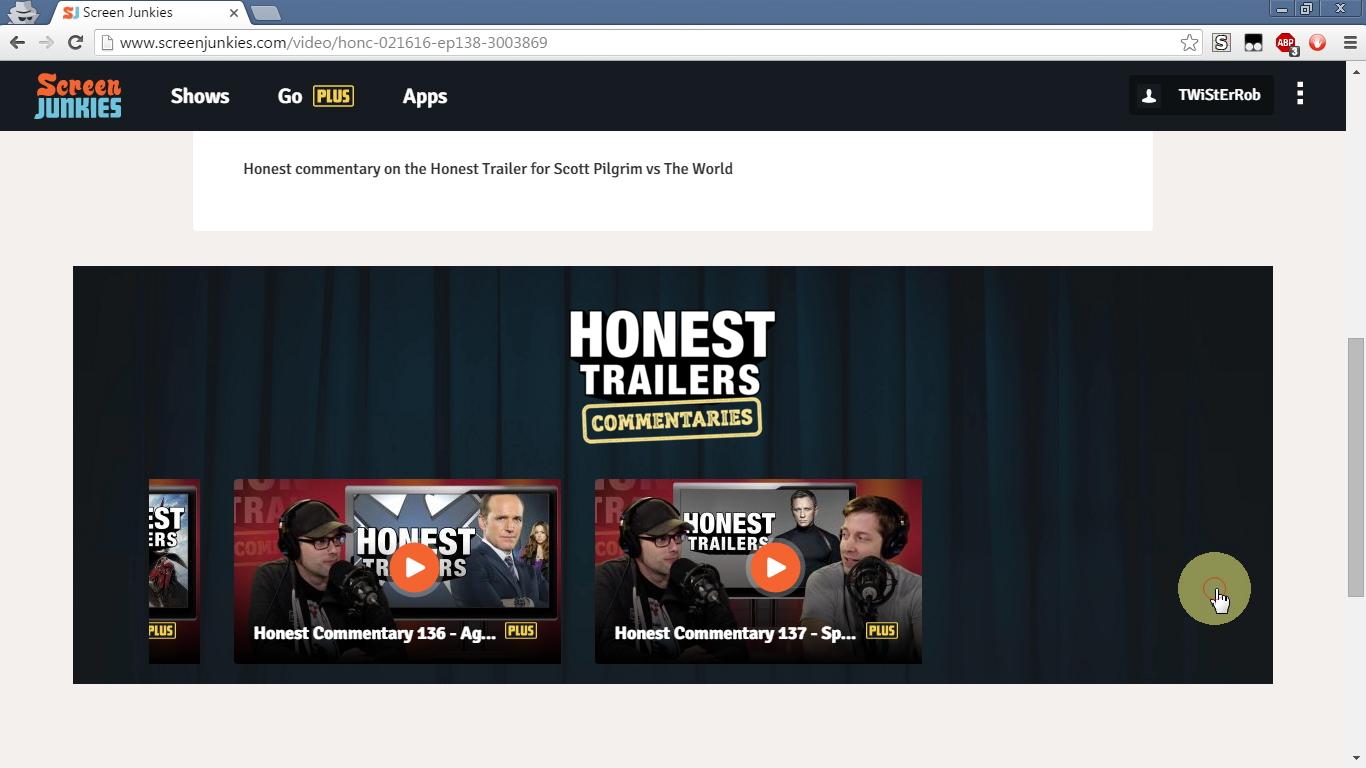 I wanted to be able to get rid of these issues and I also wanted a better listing for the shows’ episodes. Here’s what I ended up with (click the image to watch the screen recording1): 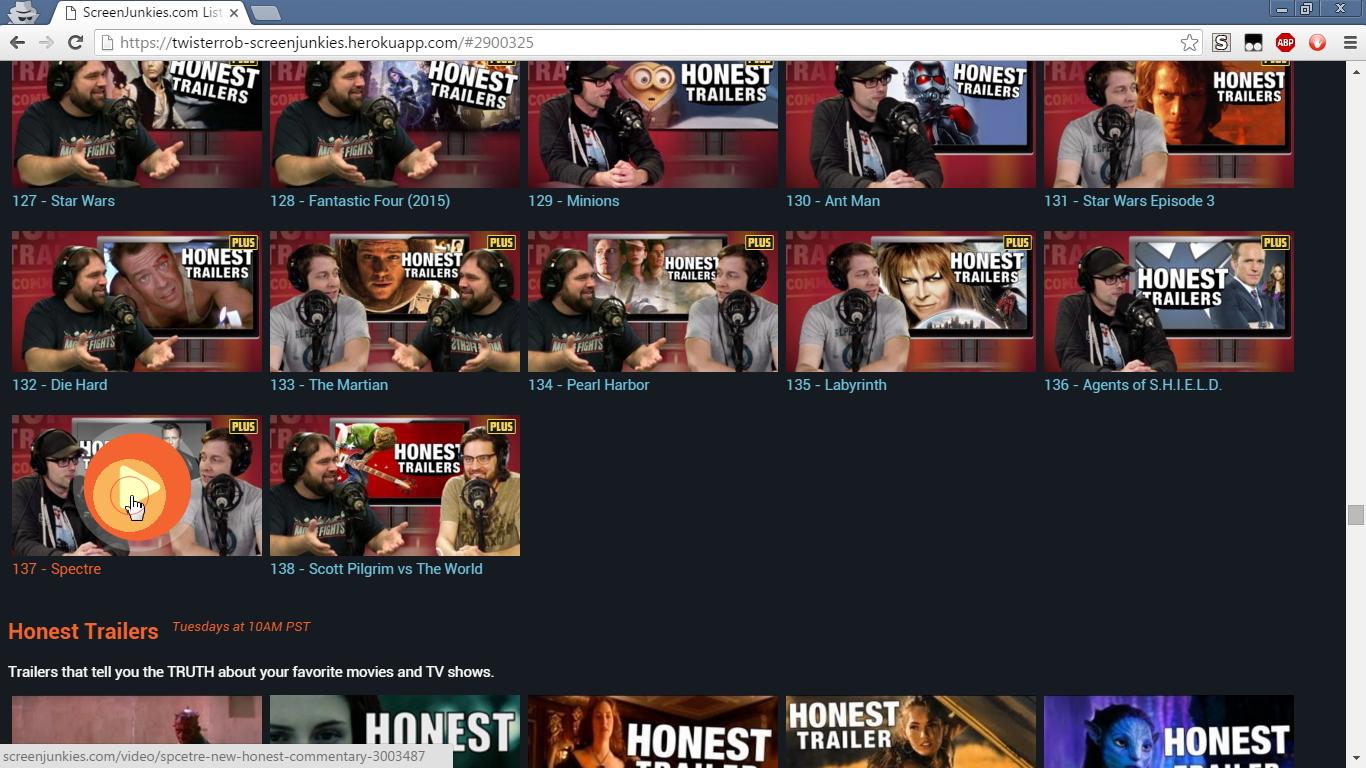 I sent a few feedbacks to ScreenJunkies support, and they said Thank you for writing, we appreciate your feedback.. I guess they will take it into account, but it may take a long time as I’m guessing that the website is not maintained in-house. It’s also possible I’m the only one who cares about ease of use, in which case they won’t change the site, so after the last response I just decided to go ahead and brew something myself.

These were my goals during implementation:

Possible future improvements, which are out of scope for now:

The last three can be achieved by fairly trivial userscripts:
(Please note that I can’t guarantee these will work in the future. Though it should be easy to fix them.)

I decided to write a simple NodeJS application so I can host it on Heroku. I can schedule a background job to periodically scrape their website and load the latest episode listing. Since they release at most a few episodes each day, I figured a 24h period would suffice. The scraped HTML is compiled into a JSON object with all the relevant information parsed out, then this intermediate representation is rendered with a JADE template into a single HTML page. This resulting page can be cached and served statically after this.

A issue I wasn’t anticipating was storing that rendered static HTML file to be served. In a normal environment one just saves the file and then stream the file as response when needed. The problem with this approach is that Heroku’s dynos may be stopped/started/restarted/put to sleep/woke up at any time. The Hobby dynos may be reallocated to a different server meaning that the ephemeral file system they use will just lose all the cached data, so I needed an external storage system. I was contemplating using an RDBMS or Graph DB, but they both sounded like overkill for a simple file storage. The next idea was to use Amazon S3, but when the website asked for my credit card I gave up on it; free usage expire after 12 months anyway. Next I looked at the storage add-ons on Heroku and found Redis, which can outlive the Dynos and has a very simple get/set interface.

Thinking about another potential use case:

Let’s see if they have an episode about <title> movie!
or
My friend came over and I want to show a joke in one of the episodes.

For this you need to be able to find the episode quickly, you can’t just scroll through with the carousel looking at each episode, because it takes a lot of time and most of the time the titles are not even readable:

Unless you’ve seen the movies they made the Honest Trailer about and recognize the picture, it’s hard to figure out which movie it is by a quick glance. To alleviate this I decided to clean up the titles by removing the show’s title from the episode’s title, because the heading or the thumbnail already tells which show I’m looking at.

Humans are inherently flawed and inconsistent most of the time, this reflected highly in the titles of the episodes. For example here are the different titles patterns that were used for the Honest Trailers show:

No wonder Google discards punctuation when indexing the web. I guess they are all equivalent uses, but the randomness feels disturbing to me. Probably the title depends on who uploaded it to YouTube and what mood they were in.

The most consistent show in this regard was Spencer’s Does It Hold Up? where the titles are cleanly: Does <title> Hold Up? w/ <guest>. Interns of F.I.E.L.D., Movie Games, First & Worst, Mega Movie Get-Together and TV Fights come in second place with 1-2 unintentionally non-uniform titles.

The ScreenJunkies website has 557 episodes to this date, rendering all that on a single page is nothing for a browser running on today’s computers, but rendering all those with thumbnails makes a ton of separate requests for each image. If the browser fires all those requests during page load, you’re left with a bad user experience and an overloaded server. For this reason I used lazy loading images with a thumbnail of the show showing as a placeholder. The images are loaded when the user actually sees them, as it would happen with ScreenJunkies’s original carousel solution.